According to a report cited by Gamasutra, there was a staggering 1,099 console video games released to retail this past year.

And of course half of them were either Rock Band or Guitar Hero properties, am I right? 🙂

Anyway, today I took stock of the retail games that I purchased or were gifted to me in 2009 …

Nineteen games? I would have figured a number much smaller than that. Hey, I’m an enthusiastic gamer and all, but we developers have a large network of gamers to borrow from and free access to a large library of titles at work. So look at me being a good American consumer anyway. During a recession, no less. Capitalism!

I don’t know exactly how many games your average console owner buys, but it is certainly a much smaller number. When I worked for Microsoft I remember our marketing guys claiming consumers buy, on average, 9 retail-priced games for each console they own – during the lifetime of the platform. Incidentally, this is how Nintendo ** and Microsoft and Sony make money on their consoles, through the license fees of a meager 10 or so new (i.e. not from the used rack or bargain bin) video games over a 5 year run. Sony would do well to remember that before releasing another $600 console. 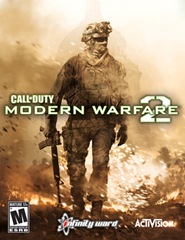 To me, with your average console owner buying maybe 4 new games annually *** in a year with 1,099 titles to chose from, there’s a very sad truth to be found: There’s a lot of game developers taking a severe pounding out there. And this is only for the developers that actually ship a product and have to compete with Modern Warfare 2 for shelf space.

There might have been a day where you could wander aimlessly with a schedule and some money and a room full of gaming geeks to release a game to market and hope for the best … but that day has long gone by. This is serious business.

I truly believe that rule number one for our business is that we must find fun in our work (really, why even bother with it otherwise?) … but it’s also a tough industry that requires us to be a little bit grown up about it too.

Good luck in 2010 to all my developer buddies.

* Looking back, I’m a bit surprised the Wii games didn’t compete better for my dollars. But then again, it was a relatively weak year, with respect to the games I prefer, for that platform.
** Yeah, I know. Nintendo actually turns a profit on console hardware sales alone. Sony and Microsoft take note.
*** I’m being generous here because that statistic is a bit old and many homes have more than one console.