A killed MMO. How very rude.

As a firm believer of Gabe’s Greater Internet F*ckwad Theory, I’m really not that much of a multiplayer kind of guy. Still, in the mid-2000’s I got hooked for a bit on City of Heroes – so much so that I sought out a job with their publisher, NCsoft, back in 2004.

One of the things I used to love doing back then for job interviews was to show up with a sealed copy of the last game I shipped, as my special gift to you. And I’d always offer to walk through some part of the game, highlighting components that I worked on and adding in some anecdotes about lessons learned and what-not. If you’ve shipped a game in the last couple of years then I can’t think of any better way to sell yourself in an interview. This is one slick move, even if it does cost you $50.

So of course I pulled this off when interviewing with NCsoft, and I really think it helped me get hired on over there, even though I had embarrassed myself earlier in the interview.

The years that followed would be an interesting mix of success and failure. I had grown much more in those 4+ years than I had ever before and worked with some very talented and smart people. I still think my old boss and mentor from that place is the best lead I’ve had in this industry to date.

Yet ironically, the game we put together turned out to be a flop. To the public who buy our games I’m sure it’s a reflection on just how lame-assed and lazy we all were. But the people who actually work in the industry will know my pain: It’s just so very hard to make great software, and even harder to make successful software.

There’s a double-edged sword to working on MMOs that I never really thought about until Tabula Rasa went into sunset:

I usually have a “let’s see other people” kind of relationship with the games I’ve worked on by the time it comes to ship, but every know and then I still like to dust the game off, pop it into my PC or Xbox, and take delight in some of the work I’ve done over the years – but I just can’t do that with Tabula Rasa ever again.

And that’s awful because I actually like the game a good bit. And the ratings gathered by Game Rankings and Metacritc aren’t that bad. There’s a lot in there for us to be proud of. 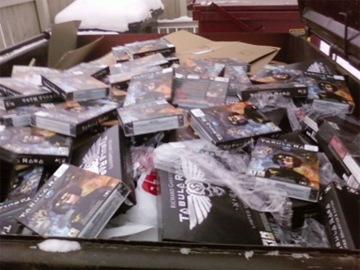 And dang it all, after we were all laid off I lost my best weapon in the job interviews that followed. The sealed copies were just a liability now, reminders to employers that my last game did so poorly that you can’t play it even if you wanted to. That sucks.

Quite frankly, taking away my ability to ever play the game again is the single most rudest thing that has ever happened to me in this business. It’s one thing to see your work in the bargain bin … but the trash bin? Ouch!

I often think about how things could have ending up differently for us on Tabula Rasa, both the stuff we could control and the stuff that was out of our hands, and I plan to write about in a non-litigious-inducing fashion someday … but for now I just miss my poor little game.