This evening I took a night out with a fellow video game enthusiast and very special lady (read: my 7-year-old daughter) to see a homegrown video game tribute band: Descendants of Erdrick.

Fun fact: The band name is a cute throwback to the NES Dragon Warrior games, where the heroes are descendants of the legendary hero, Erdrick. 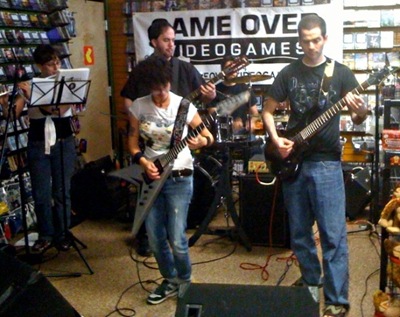 Anyway, we had a great time at the show and were treated to music from these classic games:

Yes, there’s some gutsy picks in that setlist (T&C Surf Designs?) but I’m just a bit sore they didn’t have any pieces from The Legacy of the Wizard. 🙂

The highlight for my daughter, easily, was when they played the ever-pleasing Zelda music. I’ve always been a huge Final Fantasy 6 fan though, so I was moved by their rendition of Terra’s Theme – especially when my 7-year-old turned to me and correctly identified that piece of music as “the part where they’re walking in the snow in robots, right Daddy?”

I got to meet with the band briefly after the show and they were absolutely overwhelmed by the positive response they got from the crowd. I think they’re just so new that they don’t yet realize the value their art is providing to gamers that grew up on these titles.

… what a great message to be bringing with me back to the office after the March break.

By the way, some of their music is available on their myspace page but quite honestly I don’t think it does them justice. The enthusiasm and energy and love for what they do was much more pronounced on the makeshift stage tonight. I highly recommend you seek them out in a live venue.

With Austin’s status as the live music capital of the world with a large video game development community it’s a wonder a band like this hasn’t popped up before. What a great opportunity for this talented group. I hope they do well.

Edit: Many thanks go to Austin’s own Game Over Videogames for hosting this free event.