Huge Mega Man fan here: I’ve loved the franchise ever since the first game, that I accidently bought at a Consumers Distributing in Peterborough, Ontario – because I confused it with Bionic Commando.

(No offense to Bionic Command, which is great game in its own right, but that’s the best mistake I’ve ever made in my gaming life.)

Naturally, I purchased Mega Man 10 when it became available on Xbox Live* last week and it’s pretty much what we’ve grown to expect and love – although the Sheep Man robot master leaves me scratching my head a bit. 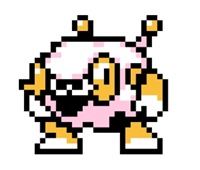 And you know what my 7-year-old daughter has a picture of on her pajamas? Sheep.

(Still, I have to admit that his Thunder Wool ability, even though it sounds lame as well, is actually pretty cool.)

All kidding aside, I think the game is great, and well worth the $10 or so in points to download. But like the long-awaited Mega Man 9 that came before it, I’m more than a little overwhelmed by the difficult achievements**, which include …

Personally, I just don’t see how playing through Mega Man without taking any damage could be fun, I guess that’s one just for the ultra-hardcore. But worse than the difficulty of the achievements is the addition of the Easy difficulty setting. And we’re talking big time easy here, with weaker enemies, less damage, and nearly 100% muted environmental dangers. I’m all for making a game more accessible – but this just doesn’t feel right.

And worse, all but one of the achievements can be unlocked in Easy mode, pretty much ensuring that the majority of players will be playing, in my mind, a much weaker game.

By the way, here are some of the things you can not unlock achievements for …

Those just seem like no-brainers to me – some good, solid achievements that would extend the replay factor of the title and reward players for sticking with it.

Of course, I still heartily recommend Mega Man 10, but there is a missing attention to making the features, difficulty, and achievements work together to influence the game to be played at its best and fullest. Achievements (and Trophies) are now an integral part of our gaming fun*** and developers need to give them the same kind of design love that the in-game experience commands.

* I only recommend Mega Man on the Xbox 360 if you’ve got a good D-pad controller. I use the Street Fighter IV FightPad.

** I won’t complain about beating all 8 robot masters with only your default blaster. Although challenging, it is a fun achievement - exactly the kind of stuff I’m looking for.

*** It pains me that Nintendo hasn’t gotten on the Achievement/Trophy trolley yet.