Note: The guys at 1 More Castle came up with a great idea: a day of blogging completely devoted to the review of games, new or old, retail or indie, that we may consider great. It’s an exercise of positive reflection on the titles that make us the gamers we are.

They’ve deemed April 8th to be international Review A Great Game Day. Dozens of such articles are available on their webpage now … and more are coming. I highly recommend a visit.

Below is my entry focused on a game that I hold dear. (Naturally, I waited until the last minute to write it.) 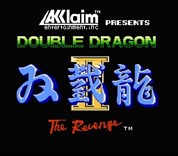 The original Double Dragon game was something that completely blew my mind when I first saw it in arcades back in the late 1980s. When it became available for the Nintendo Entertainment System I saved up for months to bring it home.

On that day, my brother and I rushed into the house, ripped off the plastic, blew as hard as we could into the cartridge slot and then … what the hell is this? No cooperative two-player?

Thank god that years later Technos Japan would redeem the series with what I consider to be one of most essential games of any NES collection: Double Dragon II: The Revenge.

Cooperative Play … and Much More

Double Dragon 2 is of the rare breed of games that can be enjoyed both with a friend or solo – even by today’s standards with games like Halo or Gears of War. 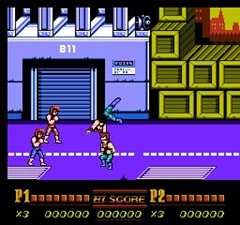 Equally impressive, especially for the time, is the rich repertoire of moves available to the player. Fans of the series will enjoy the feature that Double Dragon brought to fighting games: The ability to grab your opponent by the hair or collar and whale on them. Yet even here you have several choices at your command: You can kick the bad guy repeatedly, you can toss him over your shoulder, you can elbow drop, and you can “upper kick” – my favorite move that launches your opponent upwards – hopefully into some environmental hazard.

Additionally, Double Dragon 2 introduced a number of well-timed super moves. I never grew tired of jumping into a cyclone kick, landing, and then following up with a high-jump kick …

But There Are Frustrations

For its greatness, Double Dragon 2 does manage to be an unfairly punishing title at times. The biggest complaint is, sadly, the controls. Being on the NES, the developers had no choice but to somehow map 3 actions (left attack, right attack, and jump) onto 2 buttons. The choice of making jump a simultaneous A + B button press was unavoidable but I often can’t get the timing down right.

For the most part, this is a forgivable flaw, but when combined with the areas of the game where you are expected to platform it becomes a controller-smashing-inducing experience. 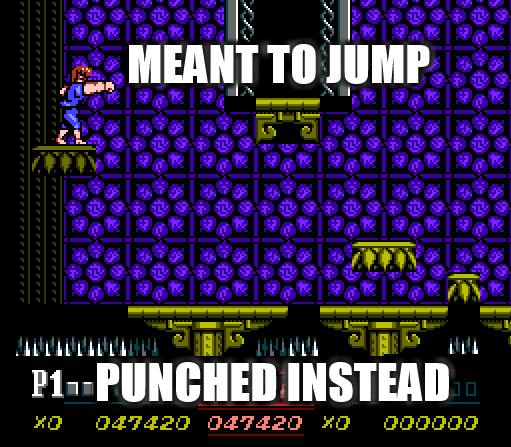 On many play sessions (yes, with my kid brother) it was these areas where the game broke from its true design (Platforming?! In a fighting game?) that kept both of us from seeing the game through to its end. I don’t mind losing when I have a lack of skill or I make a poor decision but stuff like this can be a real drag.

But when focused on fighting it’s difficult for me to think of a better game in the genre. In addition to your fists and feet it can also be fun to have the environment finish off your opponents instead. My favorite is timing my movement and attacks to ditch enemies out of a flying helicopter in Mission 3 – Battle in the Chopper but there are plenty of other ledges and spikes throughout the game that can do the work for you. 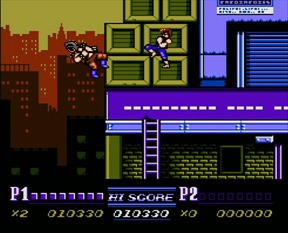 These are the kind of gameplay elements that would make great achievements or trophies on today’s consoles and makes me wish that publishers would take more care in re-introducing us to our best-loved games from another time. Emulation on Virtual Console, PlayStation Network, and Xbox Live Arcade is one thing but I’d love see faithful recreations that give us something more (like online co-op) and Double Dragon 2 would be a great guinea pig for such an experiment.

Until then, I’ll just have to bring the original Double Dragon 2 cartridge (Game Over Videogames is good retailer to find one) to my brother’s house. Too bad he still lives up in Canada, the hoser.