While gushing over Rocksteady’s exceptionally executed Batman: Arkham Asylum one thought kept occurring to me: I am insanely jealous of Batman fans. Playing Arkham was a blast for me, but for the hardcore Batman connoisseurs? It must have been pure Nirvana. 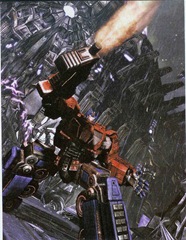 I appreciate Batman as a character - but I’m much more of an Optimus Prime kind of guy. Unfortunately for us Transfans though, the original toy and cartoon dominated our demographic during the video gaming dark ages, after Atari’s collapse but before Nintendo became a household name. So to date, we never got a competent effort of our favorite franchise in video game form.

Anyway, it looks like our wait for the real deal might soon be over. Activision and High Moon Studios are working on a game based on the classic series titled Transformers: War for Cybertron.

Judging from the title and concept art it appears the game’s fiction takes place millions of years before the Autobots and Decepticons crash-landed on Earth, which suits me just fine. The War Within comics took a similar approach and I thought it was the best comic series based on the IP this past decade. I love seeing how the characters looked before taking on their earthly disguises, and Cybertron is just cool as far as fictional planets go. 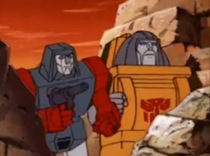 Apparently, the developers are borrowing gameplay elements from Gears of War and, well, that’s just prime. Considering that most battles from the cherished cartoon involve robots taking cover and firing at each other - I think this is a great idea. In fact, since I first played Gears of War I thought it would make a great mechanic for The Transformers. It will be very interesting to see how they incorporate transforming and alternate forms into that model though. Perhaps it will be something as ‘easy’ as a minigame, where you play in the other form for a level or two, but I’d love to see it as an integral part of the game*. This is The Transformers after all.

So here’s hoping High Moon knocks this one out of the park. And I pray to Primus they’ve casted both Peter Cullen and Frank Welker to voice the iconic characters they breathed life into back in the 80s.

* Yeah, much easier said than done!