So that's why I can't stand people

By programmer standards, I think it’s fair to say I’m a fairly social guy. I imagine most people I’ve worked with would say I’m a friendly, approachable guy – perhaps even a bit extroverted.

I figure that’s mostly due to enjoying my work so much and because, at the office, we tend to share the same goals and interests. But people who meet me outside of work, especially those who know me primarily as “Christy’s husband”,  tend to think I’ve got a some issues. Pretension is a common complaint. 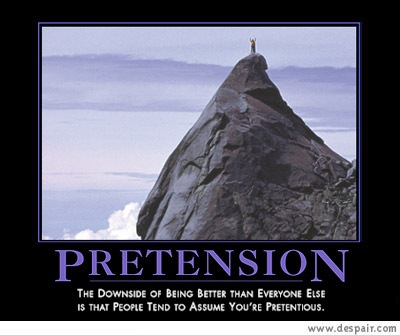 But it’s nothing personal, I just have a very difficult time to talking to you.

I wasn’t always like this, but thanks to Scott Adams’ entry on Brain Management, I think I know what happened: my career as a software engineer.

During one period of my life I wrote a number of computer programs that involved intense manipulation of objects in my mind, for hours each day. I discovered that it was difficult to be social at night when my mind had been manipulating object during the day. It felt as if I were deep inside a cave and yelling to the people who stood at the cave opening. It seemed as if the practice of programming interfered with, or exhausted, the part of my brain that handles social skills.

I often thought I just grew up in my mid-twenties and got into computer programming because it fit my new mental state – but now I’m thinking that perhaps the act of programming has changed me. I certainly do find people utterly exhausting at times, especially when the working day is done.