Note: It’s April 8th again which means my friends at 1 More Castle are hosting Review A Great Game Day. I love this as I feel our hobby and craft can always use more positive energy (especially this past year, ffs) so I’m happy to contribute my own review and honor a game I’ve loved for almost 30 years. 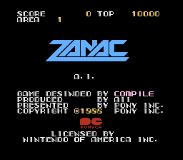 It’s no secret to people that know me that I love the 1980s. What other decade can compare culturally to the one that gave us Tears for Fears, Back to the Future, ThunderCats, and the Nintendo Entertainment System? Granted, my children have a good argument in My Little Pony: Friendship is Magic representing their generation well but what if you want to experience a good Transformers movie for once? Sorry kids, you need the 80s for that. (‘Til all are one!)

One throwback from the 80s that we don’t see emulated often these days is the SHMUP game. There are a ton of titles from that time and genre that are awesome from Xevious to 1943: The Battle of Midway and the ever-popular R-Type and Gradius franchises – but there is one game that I consider the very best on any platform: Zanac. 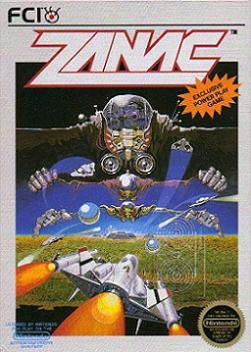 The Best of SHMUP Gaming

When it comes to what we love most about the mindless fun in SHMUPs, Zanac has everything going for it. 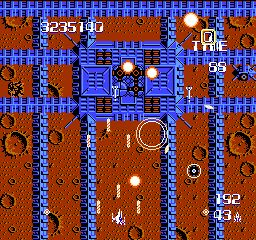 First of all, Zanac is fast, and I mean blistering. At times the background scrolls by faster in this game then anything I’ve yet to play. Most game developers now do their best to keep the action running at a steady 30 frames per second – a difficult task given the increased complexity of video games today.

But Zanac keeps a steady 60 fps throughout. I’ve been playing the game for decades now I’ve yet to detect any slowdown. The programmers at Compile were wizards of their time.

Zanac also does a great job at pacing. I love how the background scrolling slows down at times (and even stops for boss battles) to give the player a bit of a break from the speed and enjoy the pixelated graphics. This range in movement makes the hectic parts even that more punctuated. It’s perfect.

The weapon power-ups are a lot of fun too and with a few exceptions (more below) each of the 8 special weapon types are useful for a particular style of play or type of enemy or environment – although most players will likely stick with one fully powered-up special weapon and stick with it throughout the game (Special Weapon 7 seems to be the favorite for most gamers). 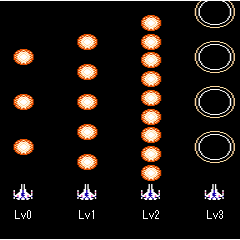 The developers at Compile took a clever approach to “boss monsters” in the way of fortresses that are made of smaller, reusable parts grouped together into some construct. As a developer I love it when games repurpose assets in a way that doesn’t feel repetitive. In Zanac, each fortress encounter feels unique even though they are essentially made of the same elements. 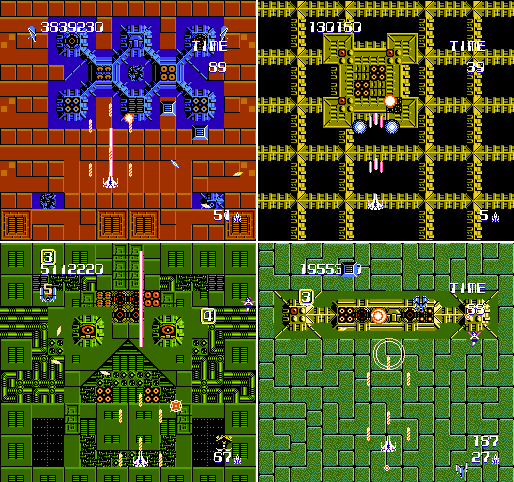 And oh my god the music in Zanac is fantastic! Each piece of music is super catchy and fits in with the fast-paced sci-fi shooter action masterfully. I have the soundtrack on my iPod and there isn’t a week that goes buy that I don’t listen to it. It’s so good.

An Added Twist that is Almost Perfect

Zanac is also well known for it’s adaptive artificial intelligence that scales the difficulty based on your skill and/or aggression — at least in theory. This can be a useful feature as the game won’t be as punishing if you lose a ship and have to respawn with base weapons.

Where this doesn’t quite work is some special weapons automatically crank up the difficulty when you acquire them. The Special Weapon 2 (shield) is the worst offender that instantly brings about waves of the most powerful enemies in the game if you equip it. This essentially makes that power-up useless and it’s a real drag if you should accidently pick it up – something that is easy enough to do given the frantic pace of the game.

However, this feature does make each play session a bit different than last, adding to replay value. And, I love the way Compile wrote this feature into the fiction of the game: Humanity is at war with “The System”, whose adaptive A.I. would easily destroy a fleet a fighters. Hence, the need for a single pilot to infiltrate and destroy. (Hey, it’s from the 80s.)

A Forgotten Game (and Genre) Worth Revisiting

We seem to be living in a golden age of classic styled video games with titles like Retro City Rampage, Shovel Knight, and now Axiom Verge scratching the itch left behind by the 8-bit and 16-bit glory days. It’s a great time to be a gamer and even better for a developer making these types of games with modern hardware. I only wish that SHMUPs would get a bit of the attention that seems reserved for Metroidvania style games.

Should someone out there decide to revisit SHMUP games I hope they give Zanac a serious look. I consider it to be the most essential game of the genre.

(And yes, I’m totally aware of Konami’s Life Force. It rocks! I just think Zanac is a bit better.)