A quick update on some Tileset settings that are now supported in Tiled2Unity. (With thanks to readers alerting me to such shortcomings.)

Note: You can download the newest version of Tiled2Unity here.

Previously, the shader used by Tiled2Unity on the Unity side was dependent on the alpha channel of textures alone. Old-school games have a history of using a color-key for transparency though so I’ve followed the lead from Tiled Map Editor to support this in Tiled2Unity. 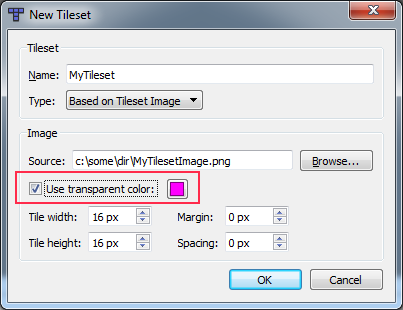 Note that in Tiled2Unity you can use both the transparent color and the alpha channel in the same Tileset/texture. You don’t have to go with just one transparency scheme.

Tilesets Made From Collection of Images

Tiled gives you the ability to create a Tileset from a collection of images. I always work with Tilesets where one image contains many tiles and didn’t even know this feature existed.

This is now supported but a word of warning: This will increase the number of textures and meshes in your Unity scene. I think it’s worth supporting for prototyping or the odd Tileset but as a rule you’re better served by grouping tiles into larger textures.